This case study highlights how the developers of SixAds and Vertex, two Shopify apps, are benefiting from ConnectPlus, an innovative in-app banner exchange platform that enables Shopify app developers to advertise their app for free.

Background to ConnectPlus The developers of two successful Shopify apps, Firepush and Tobi, initially went down the Facebook and Google adverts route to try to get their apps off the ground. After spending a small fortune doing this, they realized that spending money on advertising doesn’t always guarantee results. Consequently, they identified a need for a cost-effective advertising solution that would help Shopify app developers get their apps in front of their target audience - Shopify merchants. ConnectPlus was created in 2019 as a result of identifying this need. It’s a in-app advert exchange platform, where Shopify app developers can advertise their apps free of charge to more than 100K merchants, in return for promoting partnering developers’ apps within their own apps. This is how ConnectPlus works:

The ConnectPlus network is already proving to be of significant benefit to Shopify app developers, who are receiving high quality traffic back to their apps in the Shopify App Store. In this case study, several statistics are presented to demonstrate this, based on a number of apps currently being advertised on the platform.

SixAds is an app that helps Shopify store owners promote their products in partner stores. At the point of writing this case study (April 2019), the developers of SixAds have been advertising on ConnectPlus since January 21st, 2019. 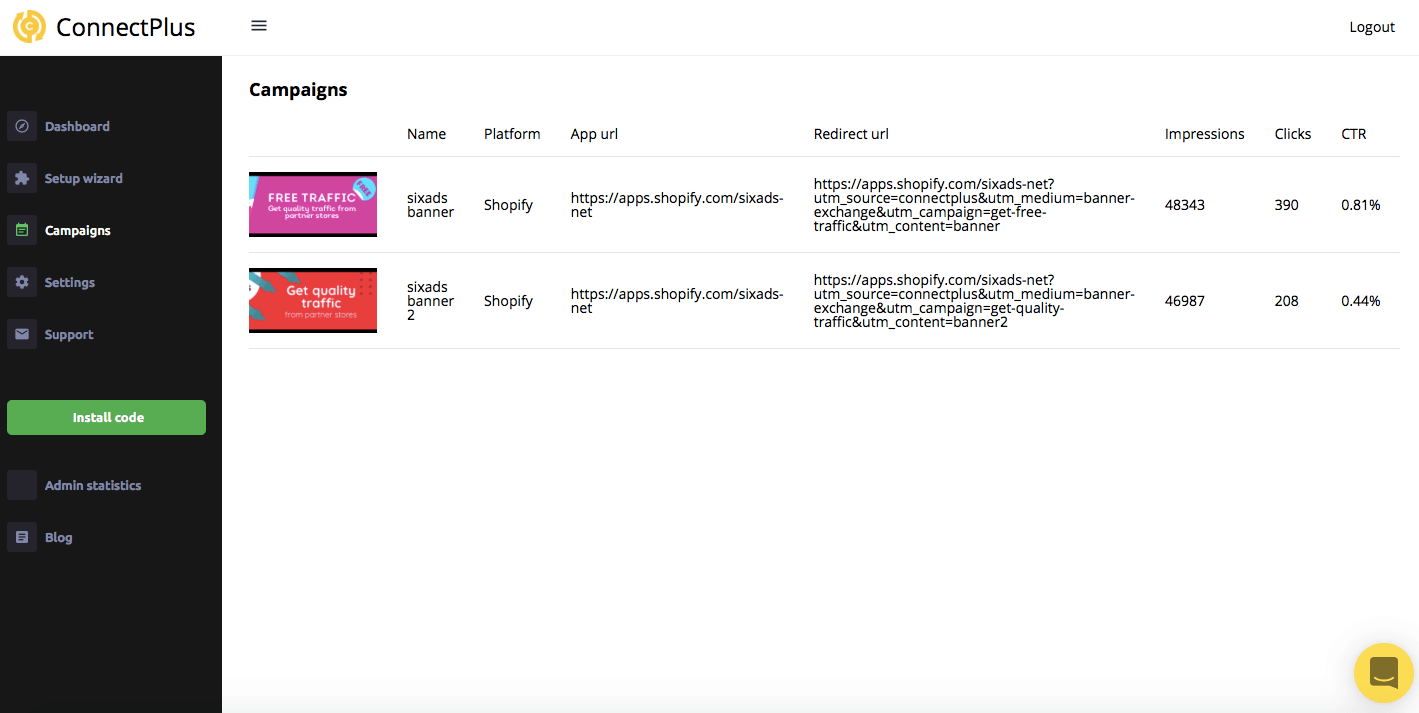 The screenshot above shows SixAds running two ad campaigns at the same time, both of which are linked back to their app in the Shopify store. The screenshot below is more recent and shows that they’ve received 95,266 impressions of their app in total and 595 clicks on their adverts. They’ve received this exposure for their app without spending any money at all, in return for displaying adverts for a partner app within their own app.

“This platform is a great alternative to Facebook ads, especially for developers with a low advertising budget. We’re getting quality traffic viewing our ads and clicking through to our app, which in turn, is helping increase our downloads.” ~ Romualdas, SixAds

Note the number of impressions and clicks from the partnering app in the screenshot above, which are even higher at 123,641 and 589 respectively. These figures highlight how beneficial ConnectPlus is for both apps involved in the ad exchange.

Vertex currently have three apps available for Shopify merchants, an image optimization app Minifier, a tool HelpCenter that builds a helpful FAQ page and an order tracking app Trackr. Since January, Vertex has achieved more than 77K ad impressions and 380 ad clicks across all their campaigns. And the developer that Vertex has partnered with has received more than 296K impressions and 624 clicks. These figures represent quality traffic to each developer’s app in the Shopify store that they haven’t had to pay for.

“ConnectPlus really works to drive traffic to our app in the Shopify App Store. The fact that it’s free for developers is a fantastic bonus.” ~ Ingrida, Vertex

Tobi is an additional example in this case study; it’s a remarketing app that’s been developed by the creators of ConnectPlus. Tobi helps Shopify store owners drive more sales through cleverly-timed, automated SMS and Facebook Messenger notifications. Over the course of five campaigns since the middle of December 2018, ConnectPlus has generated over 200K ad impressions and more than 1000 clicks to the app itself in the Shopify App Store.

ConnectPlus offers real-time ad tracking in a user-friendly dashboard so Shopify developers can see how their ad campaigns are performing. 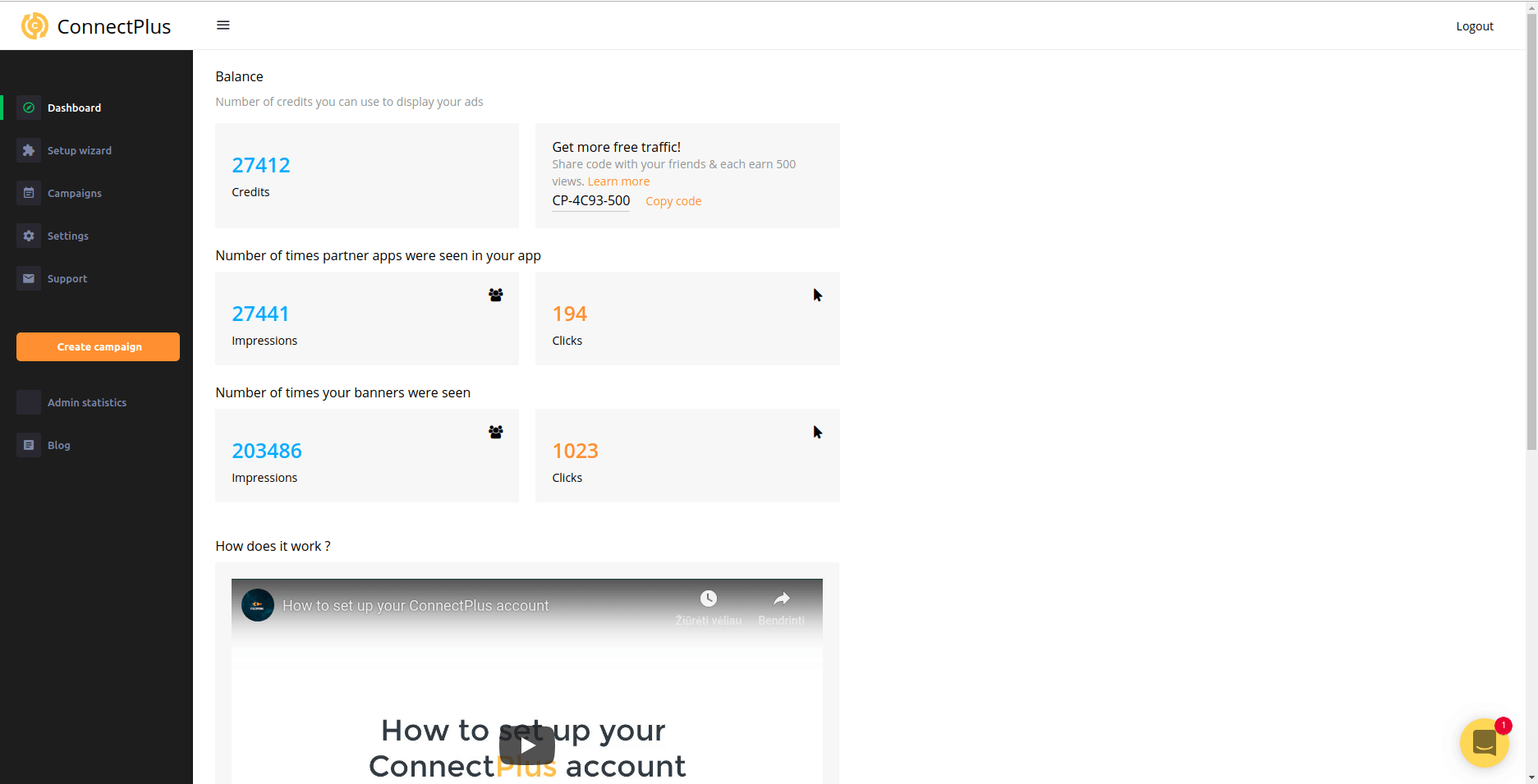 There is no limit to the amount of ad campaigns that a developer can run (see example below with multiple campaigns displayed). As well as individual clicks and impressions, developers are able to see the click through rate (CTR) for their ads in the campaign overview section of ConnectPlus (below).

The ad monitoring capabilities in ConnectPlus makes it possible to carry out A/B split testing with ease. Developers can run two adverts side by side, and make tweaks to one of them (such as changing the call to action, the fonts, or background image). Doing this enables developers to see which of their ads performs better over time and leads to increased conversions.

ConnectPlus was created to serve the Shopify developers community. It provides a way for developers to support other developers, while gaining exposure for their app at the same time. Signing up for ConnectPlus is free and fast. It literally takes just a couple of minutes to do, which is ideal for busy developers who need to focus on other things. And because it’s possible to run an unlimited number of ad campaigns and see the results for all of them in one simple dashboard, it takes the stress out of advertising multiple apps at once. To summarize, ConnectPlus offers free advertising exposure for Shopify developers, making it highly beneficial not just for those that are about to launch their first app, but also for developers that are already established with a couple, or even several, successful Shopify apps under their belt.

Join our closed Facebook community to connect with other developers and get your questions about ConnectPlus answered. Share tips and learn at the same time.

Still on the fence?

Join our closed Facebook community of developers to get your questions answered about ConnectPlus and more.